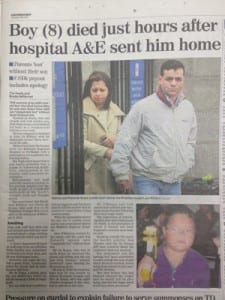 Richard de Souza , who was already sick with chicken pox, died when toxins overwhelmed his body as a streptococcal infection took hold.

He had collapsed in his home in Athy, Co. Kildare, with his distraught mother Flavia Helena by his side.

Richard had been discharged from the Midland Regional Hospital in Portlaoise with a prescription for antibiotics the evening before. The High Court heard that it was highly probable that a course of intravenous antibiotics, administered in the hospital, could have saved the youngster.

Management and staff yesterday issued an apology to the grieving parents over the death as part of a €160,000 settlement of the family’s wrongful death and damages action.

The court heard that Brazilians Ralmon and Flavia deSouza, who now live in Co Tipperary, brought their son to A&E on the afternoon of February 6, 2011.

They told staff that their son had chicken pox and they were worried about a large swelling on his left side which was hot to touch.

A doctor diagnosed Richard as suffering from an infection from chicken pox, prescribed medication for three days, and he was discharged home. However, that night the boy had a great thirst, continually asked for drinks and he later became delirious.

Mr de Souza, a jockey, gave his son antibiotics before he left the house at 5.30 am to begin work. But the little boy’s condition did not improve and five hours later he told his mother that he wanted to vomit before losing consciousness.

When the paramedics arrived the boy was in cardiac arrest and he was pronounced dead at the Midland Regional Hospital.

John O’Mahony, counsel for the family, told the court that Richard’s parents were “completely lost” without their son.

Mr de Souza, who was at work when he received the phone call telling him his son had died became “almost hysterical” upon hearing the devastating news. He was so ill for the next four days that he was unable to attend Richard’s funeral and Mrs de Souza, who was eight months pregnant at the time, had to attend on her own.

Mr O’Mahony said both parents had suffered post-traumatic stress disorder following their son’s tragic death. The experience of witnessing their son’s deterioration and his death, in circumstances in which it should not have happened, overcame them both, he said.

Speaking outside the court, the family’s solicitor Ann Nowlan said the de Souzas still have concerns about the treatment their son received. The settlement and the apology had “gone someway to acknowledge the lack of care which Richard received, and to bring them closure in this case,” said Ms Nowlan. “But they believe that had Richard received the proper care he would still be alive today, and that his tragic death could have been prevented.”