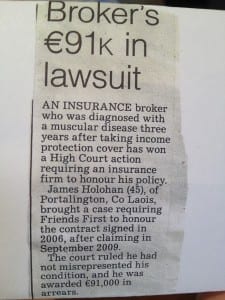 An Insurance broker who was diagnosed with a muscular disease three years after taking income protection cover has won a High Court action requiring an insurance company to honour his policy.

James Holohan (45), of Portarlington, Co. Laois brought a case requiring Friends First to honour the contract signed in 2006, after claiming in September 2009.

The court ruled he had not misrepresented his condition, and he was awarded €91,000 in arrears.