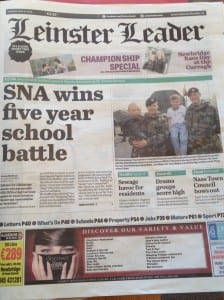 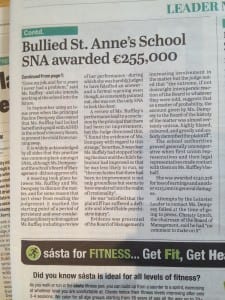 Solicitors for a Newbridge woman who was awarded €255,000 in a High Court case against St. Anne’s School on the Curragh, have hailed her as ‘very brave.’

Ann Nowlan of Burns Nowlan told the Leinster Leader that Special Needs Assistant (SNA) Una Ruffley, who sued the school’s Board of Management, ‘could have lost everything’ if her five year bid for justice failed.

Ms. Ruffley says she feels ‘vindicated’ and ‘delighted’ after a High Court judge last Friday found that she had been bullied and harassed.

In his lengthy and damning judgement, Mr. Justice Iarlaith O’Neill described the treatment of Ms. Ruffley as ‘severe’ and ‘unmerited’.

Ms. Nowlan and Ms. Ruffley said they felt they had no choice but to go as far as they did. ‘She tried everything’ Ms. Nowlan said.

‘I lo e my job and for 11 years I never had a problem,’ said Ms. Ruffley – and she intends working at the school into the future.

In September 2009 an issue arose when the principal Pauline Dempsey discovered that Ms. Ruffley had locked herself and a pupil with ADHD in the school’s Sensory Room, to prevent the child from running away.

It is widely acknowledged by all sides that this practice was commonplace amongst SNA’s, although Ms. Dempsey – and the school’s Board of Management – did not approve of it.

A meeting took place between M.S Ruffley and Ms. Dempsey to discuss the matter, and for some reason that isn’t clear from reading the judgement it marked the starting point of a period of persistent and ever escalating disciplinary action against Ms. Ruffley including a review of her performance – during which she was harshly judged to have falsified an answer – and a formal warning even though, as constantly pointed out, she was not the only SNA to lock the door.

A review of Ms. Ruffley’s performance led to a conclusion by the principal that there had been no improvement, but the Judge dismissed this. ‘I found the evidence of Ms. Dempsey with regard to this strange,’ he writes. It was clear Ms. Ruffley had stopped locking the door and the child’s behaviour had improved so that he was less likely to run, ‘the conclusion that there had been no improvement is not only groundless but seems to have wandered into the realm of irrationality.’

He was ‘satisfied that the plaintiff has suffered a definite and identifiable psychiatric injury.’

Evidence was presented of the Board of Management’s increasing involvement in the matter but the judge noted that ‘the extreme, if not downright intemperate reaction of the Board to whatever they were told, suggests that as a matter of probability, the account given by Ms. Dempsey to the Board of the history of the matter was almost certainly untrue, highly biased, coloured, and grossly and unfairly damnified the plaintiff.’

Attempts by the Leinster Leader to contact Ms. Dempsey failed at the time of going to press. Christy Lynch, the chairman of the Board of Management said he had ‘no comment to make on it’.