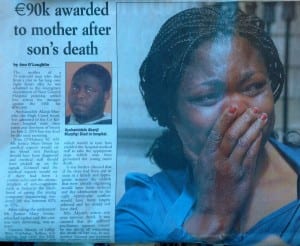 The mother of a 19-year-old man who died from a clot to his lung over eight hours after he was admitted to the emergency department of Naas General Hospital yesterday settled her action for damages against the HSE for €90,000.

Ayobamidele Akanji Murphy, the High Court heard, was admitted to the Co. Kildare hospital with chest pains and shortness of breath on Feb 2, 2010 but was dead by the next morning.

John O’Mahony SC told Ms Justice Mary Irvine his medical experts would say the blood clot blockage should have been diagnosed and medical staff should have picked up on the signals. Counsel said the medical experts would say if there had been a cardiac echo and the administration of anti-coagulants such as heparin the likelihood of saving the young computer engineering student’s life was between 82% and 97%.

After ruling the settlement Ms Justice Mary Irvine, who had earlier said the case was very distressing, was in tears.

Victoria Akanji, of Liffey Way, Catlefen, Sallins, Co. Kildare had sued the HSE for alleged negligence and breach of duty as a result of the death of her son on Feb 3, 2010.

It was claimed there was a failure to diagnose in a timely manner and appropriately treat his pulmonary thromboembolism and that echocardiography was not conducted when it should have been. The cardiac echo, it was claimed, would have provided the diagnosis which would in turn have enabled the hospital staff to take the appropriate steps which may have prevented the young man’s death.

It was further claimed that if the steps had been put in train in a timely and appropriate manner the emboli that were already organising would have been reduced and the obstruction to the right ventricular outflow would have been largely relieved and he would not have died.

Mrs Akanji’s action was over nervous shock. It was claimed that she suffered psychiatric injuries caused by the shock of witnessing the death of her son. It was further claimed she received no comfort or condolences from Naas General Hospital and on her request her GP sent a letter to the hospital requesting a meeting, but no response was received.

The HSE had denied the claims and the settlement was without admission of liability.

Ms Justice Irvine was told that the student had been admitted to the hospital A&E at 10.42pm on Feb, 2 2010, complaining of palpitations and shortness of breath. At 6.40am the next day he suffered seizures and despite efforts to resuscitate him, he died.

Ms Justice Irvine told Mrs Akanji that she was very sorry but the court had to go through the details of her son’s death and apologised for any upset it caused. She said the mother witnessing attempts to resuscitate her son when she was called back to the hospital must have been very traumatic for her.

The judge said no money could compensate Mrs Akanji for the unexpected death of her son but she hoped that as the years go by the mother’s distress will lessen.