Family secures €90,000 from HSE over death in Naas Hospital 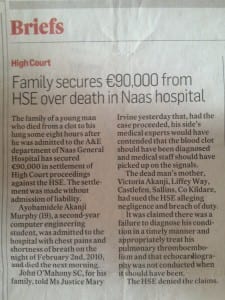 The family of a young man who died from a clot to his lung some eight hours after he was admitted to the A&E department of Naas General Hospital has secured €90,000 in settlement of High Court proceedings against the HSE. The settlement was made without admission of liability.

Ayobamidele Akanji Murphy (19), a second-year computer engineering student, was admitted to the hospital with chest pains and shortness of breath on the night of February 2nd, 2010, and died the next morning.

John O’Mahony SC, for his family, told Ms Justice Mary Irvine yesterday that, had the case proceeded, his side’s medical experts would have contended hat the blood clot should have been diagnosed and medical staff should have picked up on the signals.

It was claimed there was a failure to diagnose his condition in a timely manner and appropriately treat his pulmonary thromboembolism and that echocardiography was not conducted when it should have been.

The HSE denied the claims.