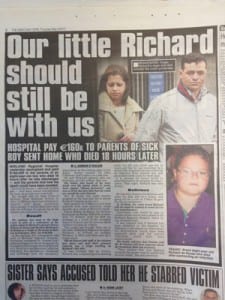 Midland Regional Hospital yesterday apologised and paid €160,000 to the parents of an eight-year-old boy who died 18 hours after he was discharged – and his parents told how his death could have been avoided.

Richard de Souza – who had chickenpox – dies when toxins overwhelmed his body as an infection took hold .

His Counsel told the High Court if Richard, from Hollands Avenue in Athy, Co. Kildare, had been admitted to hospital and given antibiotics intravenously it would likely have dealt with the infection he had on top of the chicken pox and saved his life.

The apology was read to the High Court as part of a settlement of the action taken by Richard’s parents Flavia Helena de Souza and Ralmon Rodriquez de Souza as a result of the death of their son in February, 2011 for €160,000.

In the apology, the management and staff of Midland Regional Hospital, Portlaoise, expressed its “sincere sympathy and regret to the de Souza family in respect of the tragic death of Richard as a result of a streptococcal infection following his attendance, treatment and discharge from the emergency department on the evening prior to his death”. Senior Counsel Dr, John O’ Mahony said it was a very sad case. He said Richard’s parents, who are Brazilian, are lost without their son. His father who heard of his son’s death over the phone while at work, went ‘almost hysterical’ and was so ill for the next four days he could not attend his son’s funeral.

Mrs de Souza was eight months pregnant at the time  and had to attend Richard’s funeral on her own. Both parents Dr. O’Mahony said, have suffered from post-traumatic stress disorder as a result of Richard’s death.

Flavia Helena de Souza and Ralmon Rodriquez de Souza, Hollands Avenue, Athy, Co. Kildare, sued the HSE for damages as a result of the wrongful death of Richard and for nervous shock suffered by them as a result. The couple had brought their son to the A&E of Midland Regional Hospital, Portlaoise at 4.27 pm on Sunday, February 6, 2011, and were seen by a triage nurse. The de Souzas told told staff of the chicken pox spots and said that their primary concern was a large swelling on Richard’s left side.

It was claimed that on arrival, Richard was complaining of a swelling under his left arm which was hot to touch and that he was examined by a doctor who diagnosed he was suffering an infection from the chicken pox and prescribed medication for three days. It was claimed the doctor failed to admit Richard to the hospital for observation. That night Richard was very thirsty.

He was later found to be delirious and when his dad, who is a jockey, was going out for a ride at 5.30 am he gave his son his antibiotics. At 10.30 am, the court heard Richard told his mum he wasted to vomit but he lost consciousness. Ambulance crew found he was in cardiac arrest and he was rushed to the Midland Regional Hospital where he was declared dead. It was claimed that if Richard had been admitted to hospital on February 6 and placed on observation, his deterioration would have been apparent early and the correct treatment could have been administered.

The family solicitor Ann Nowlan said the de Souzas still have concerns about the treatment their son received. “They believe that had Richard received the proper care he would still be alive today,” she said yesterday.