Mum settles claim with HSE over death of son 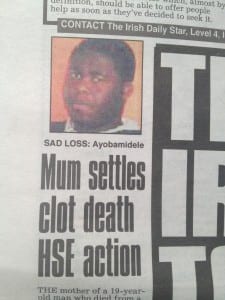 The mother of a 19-year-old man who died from a lung clot over eight hours after being admitted to the A&E department of Naas General Hospital has settled her action for damages against the HSE for €90,000.

The High Court heard that Ayobamidele Akanji Murphy was admitted to the Co. Kildare hospital with chest pains and shortness of breath on February 2, 2010, but died the next morning.

It was claimed there was a failure to diagnose and appropriately treat Ayobamidele’s condition in a timely manner.

The HSE had denied the claims, and the €90,000 settlement was without admission of liability.

Ms. Justice Mary Irvine said that no money could compensate Mrs Akanji for the unexpected death of her son, but added that she hoped the woman’s distress will lessen as the years go by.