Prisoner scarred for life in jail attack is awarded €150,000 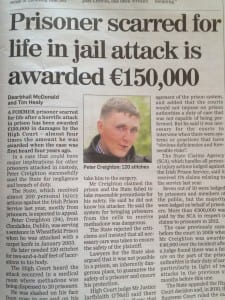 A former prisoner scarred for life after a horrific attack in prison has been awarded €150,000 in damages by the High Court – almost four times the amount he was awarded when the case was first heard four years ago.

In a case that could have major implications for other prisoners attacked in custody, Peter Creighton successfully sued the State for negligence and breach of duty.

The State, which received almost 200 personal injury actions against the Irish Prison Service last year, mostly from prisoners, is expected to appeal.

Peter Creighton (34), from Clondalkin, Dublin, was serving a sentence in Wheatfield Prison when he was attacked with a carpet knife in January 2003. He later needed 120 stitches for two-and-a-half feet of lacerations to his body.

The High Court heard the attack occurred in a medical room where methadone was being dispensed to 20 prisoners. He was slashed on his face from nose to ear and on his neck and torso. A prison officer managed to pull him away and take him to the surgery.

Mr Creighton claimed the prison and the State failed to take reasonable precautions for his safety. He said he did not know his attacker. He said the system if bringing prisoners from the cells to receive methadone was dangerous.

The State rejected the criticisms and insisted that all necessary care was taken to ensure the safety of the Plaintiff. Lawyers for the State also argued that it was not possible in a prison, an inherently dangerous place, to guarantee the safety of a prisoner and ensure his protection.

High Court judge Mr Justice Iarfhlaith O’Neill said there could be few tasks, if any, that are more difficult than the management of the prison system, and added that the courts would not impose on prison authorities a duty of care that was not capable of being performed. But he said it was necessary for the courts to intervene when there were systems or practices that have “obvious deficiencies and foreseeable risks”.

The State Claims Agency (SCA), which handles all personal injury actions lodged against the Irish Prison Service, said it received 174 claims relating to the service last year. Seven out of 10 were lodged by prisoners and members of the public, but the majority were lodged on behalf of prisoners. More than €300,000 was paid by the SCA in respect of claims to prisoners in 2012.

The case previously came before the court in 2009 when Mr Creighton was awarded €40,000 over the incident after a judge found there was a failure on the part of the prison authorities in their duty of care, particularly in light of two attacks in the previous six months before this one.

The State appealed the High Court decision and, in 2010, the Supreme Court ruled the case should be re-heard.